Since discovering my partner’s sister makes plant stands out of copper I’ve been wanting to try use copper in a project, and since seeing Ben Light’s 2×4 enclosures I have been wanting to explore that technique. With this week’s prompt – “use 2 materials” – I thought I could bring those two goals together. 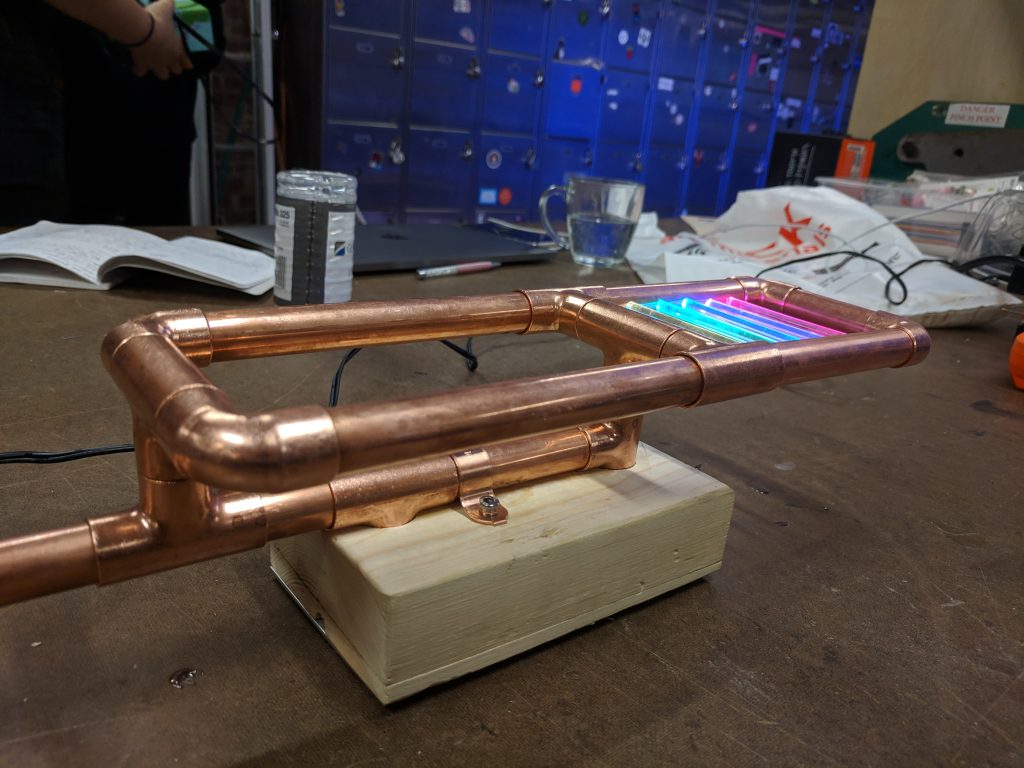 I purchased some copper pipe, connectors, and a pipe cutter from Home Depot. I found a piece of 2×4 in the scrap shelf. I used M3 and M4 machine screws and magnets as fasteners. 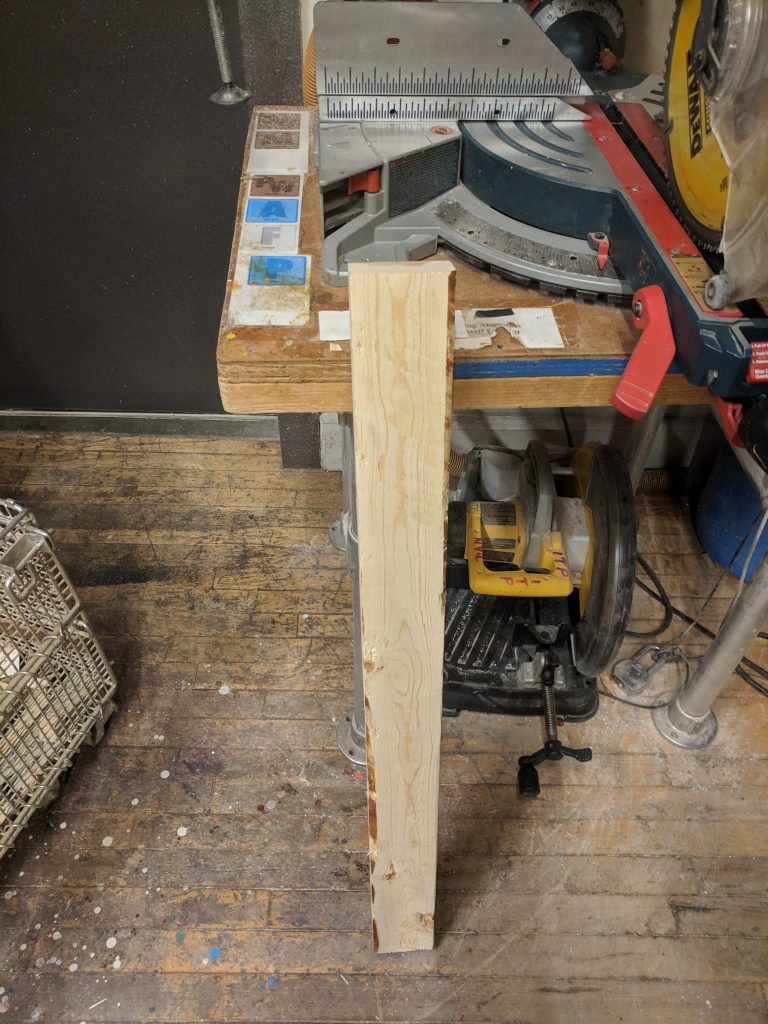 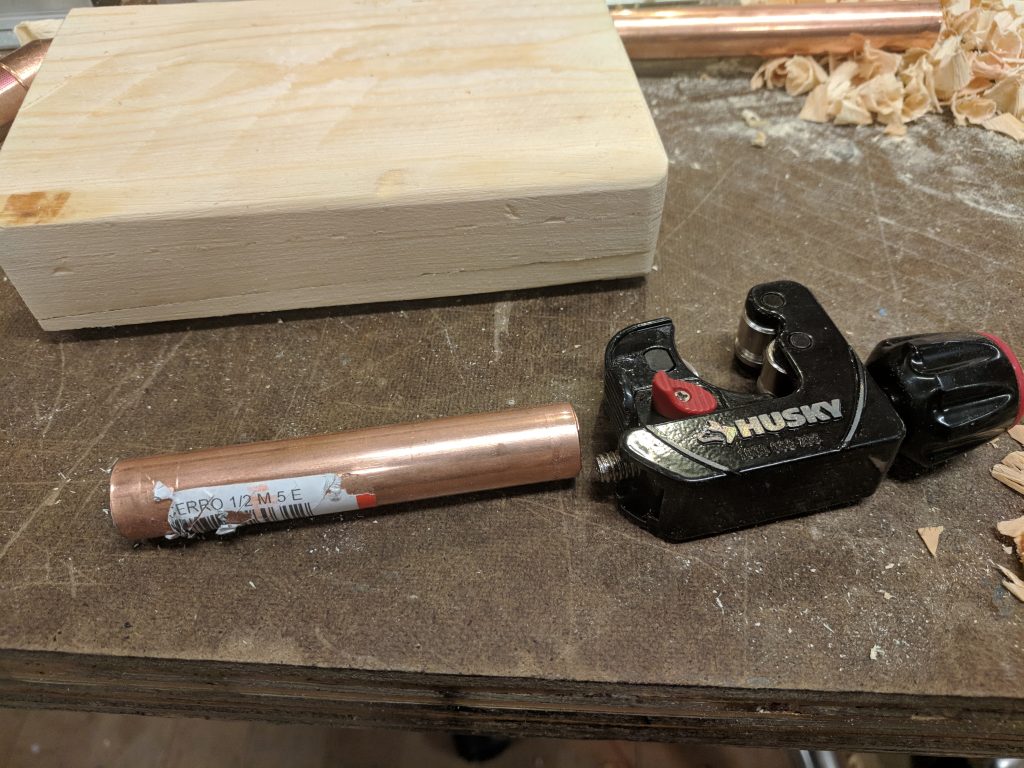 As shown in the 2×4 instructional video, I used the band saw to cut off a small section of one of the larger sides. Since it’s the band saw the piece I cut was awfully wonky, but I figured it wouldn’t matter too much since the grains on either side would match up regardless. 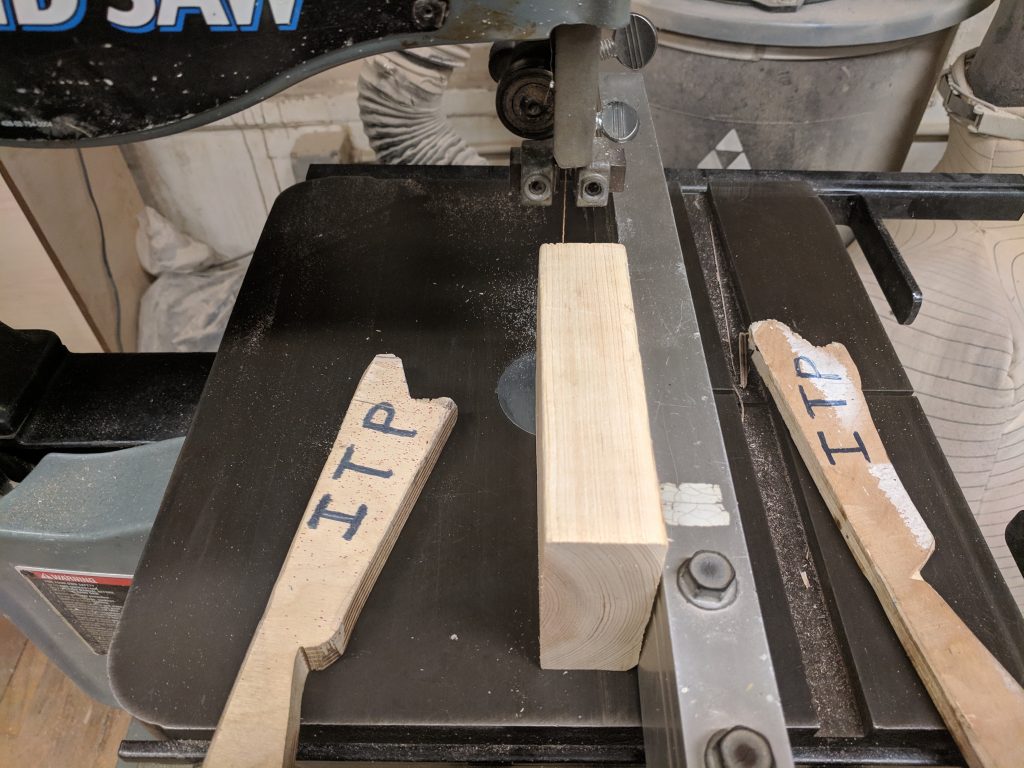 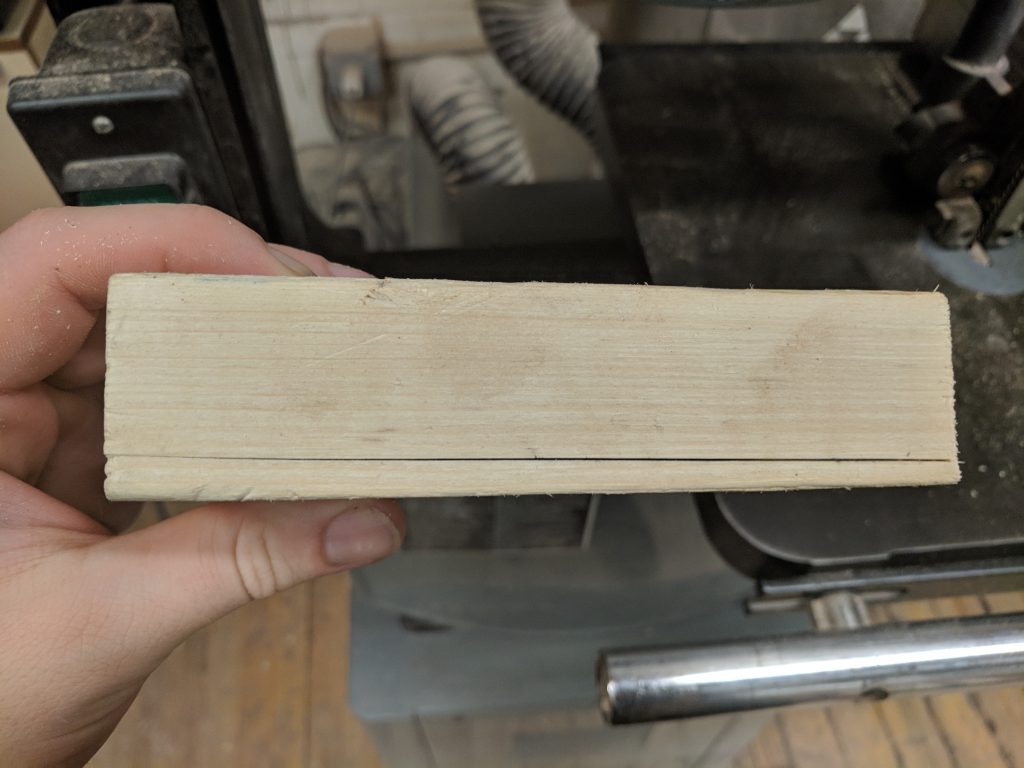 I used a forstner bit to core out the inside. 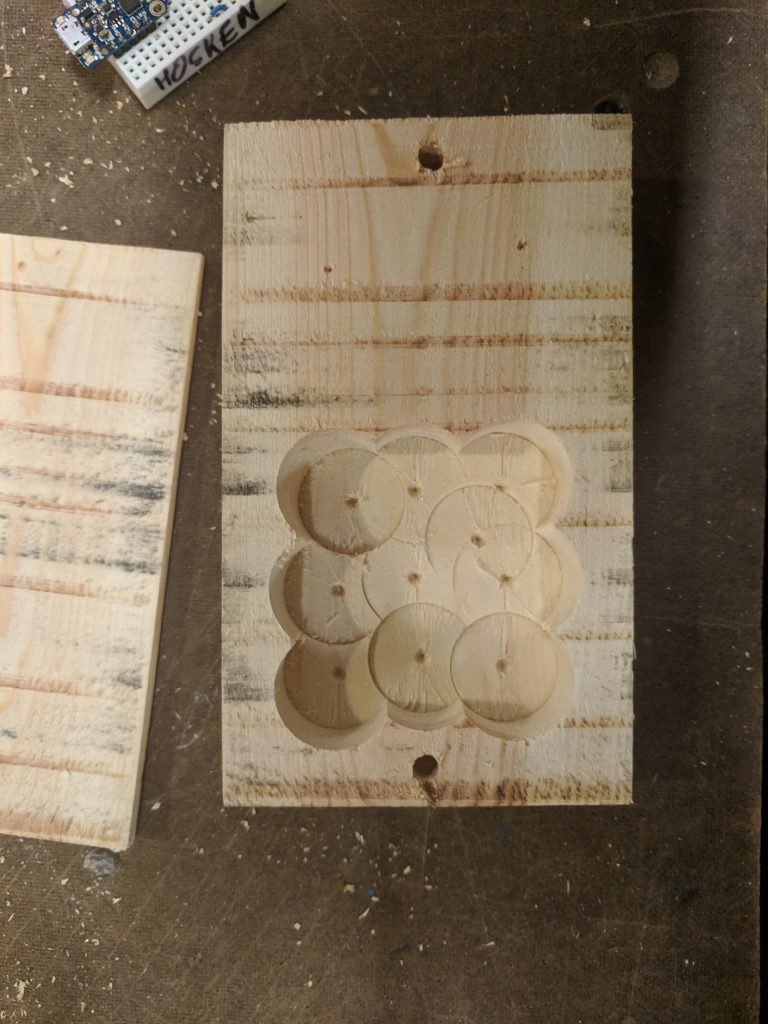 And a knife to straighten out the edges a bit, making room for a bulky arduino. 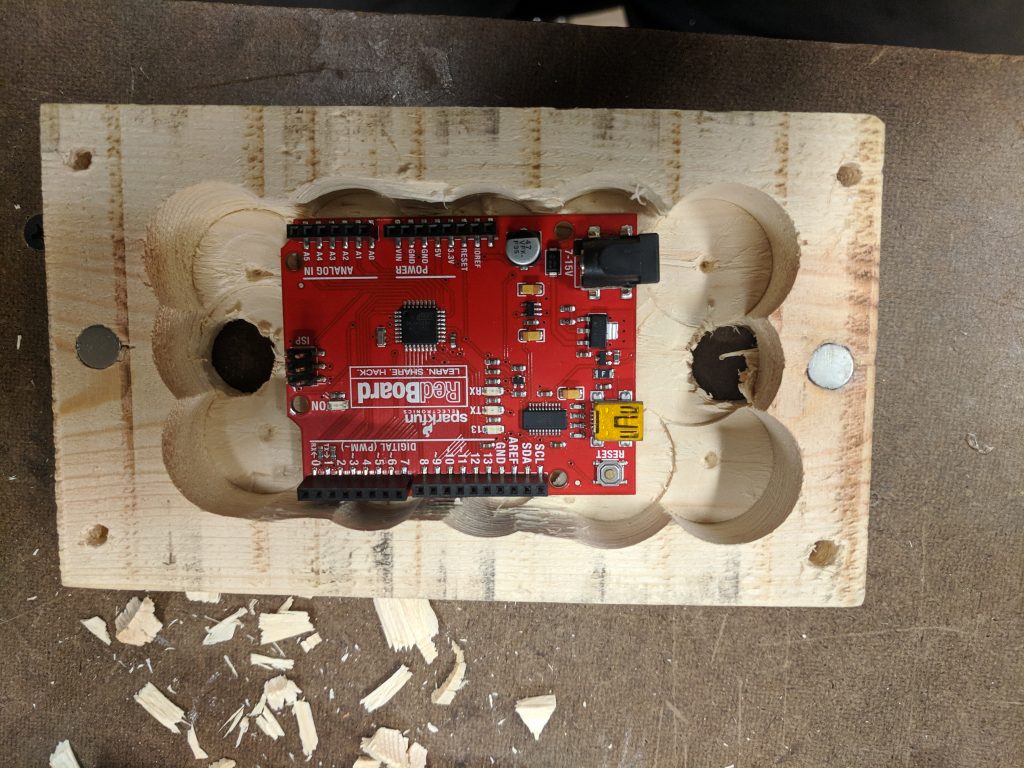 The base was a little warped so I thought that adding some aluminium supports might help straighten it out, as well as add a bit of aesthetic charm. I had some magnets lying around that I wanted to try use to hold the lid in place. Installing them was a matter of carefully measuring the holes, finding the right size drill bit, and a frugal application of superglue. I thoroughly enjoy the effect.

I went through a couple of design iterations for the copper structure on top. My primary motivation was that I wanted some sort of light display coming from the structure, but beyond that I was simply playing around. The first was far too simple for my liking: 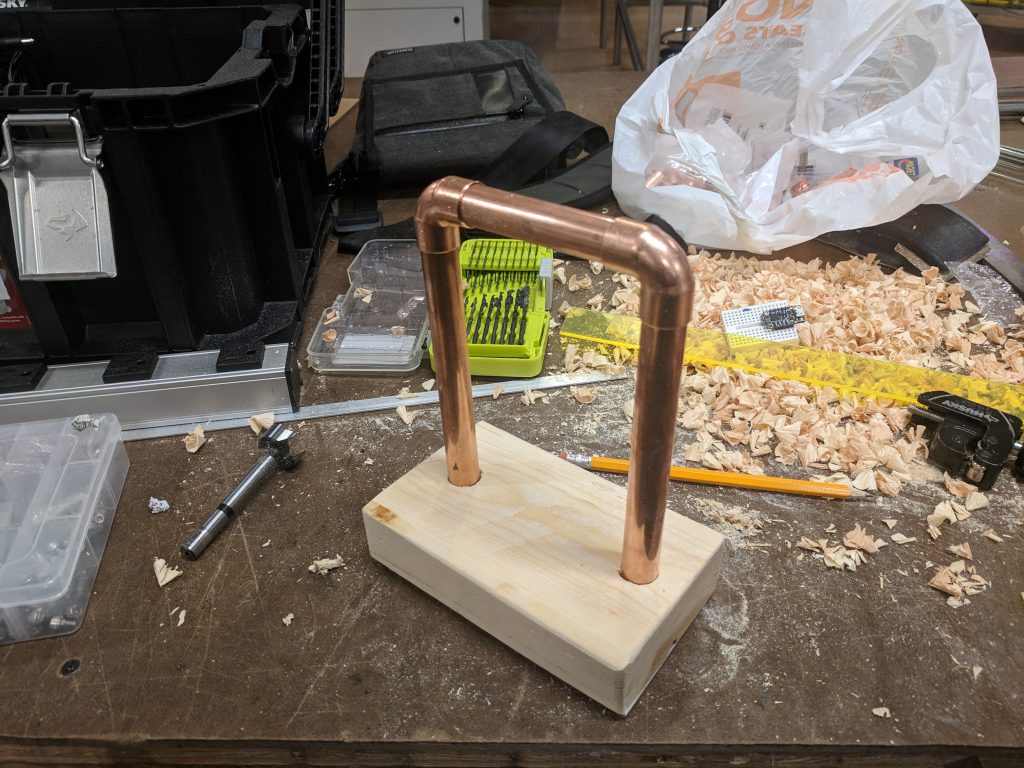 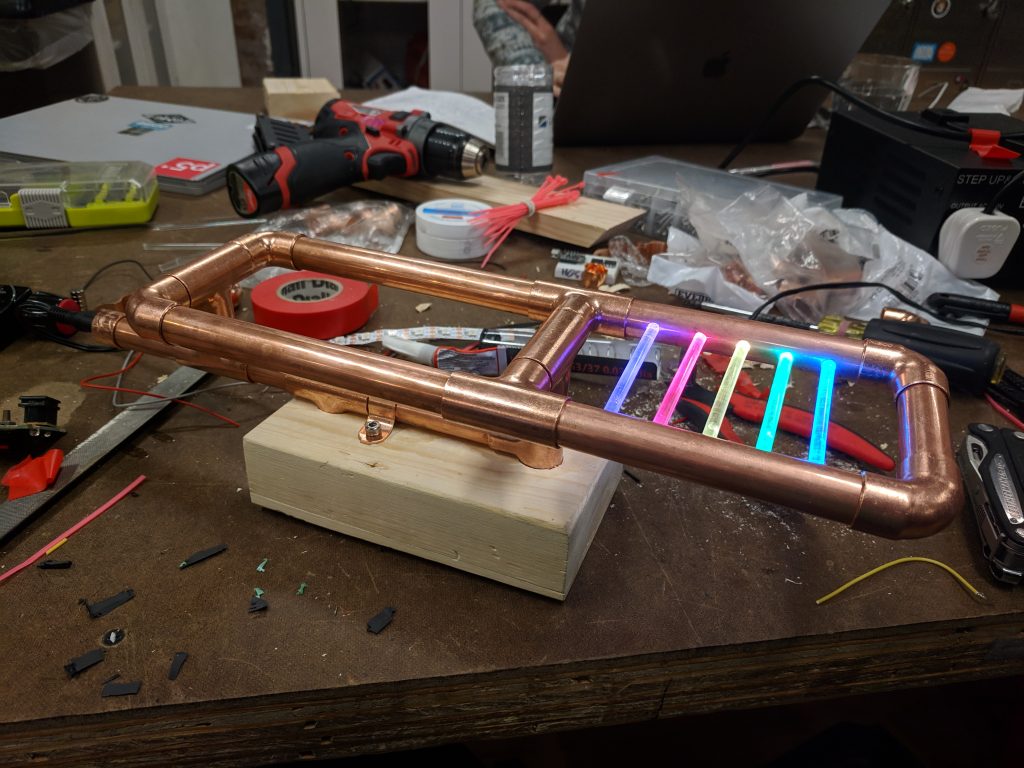 Drilling holes in the side of copper, for the plastic light rods, was a little difficult. It seemed to me as though the copper was so soft that as I stepped up in bit size the larger bits had a tendency to eat away big chunks of the metal, leaving wonky and irregular holes. Perhaps for version 2 I’ll use the drill press for more accuracy. 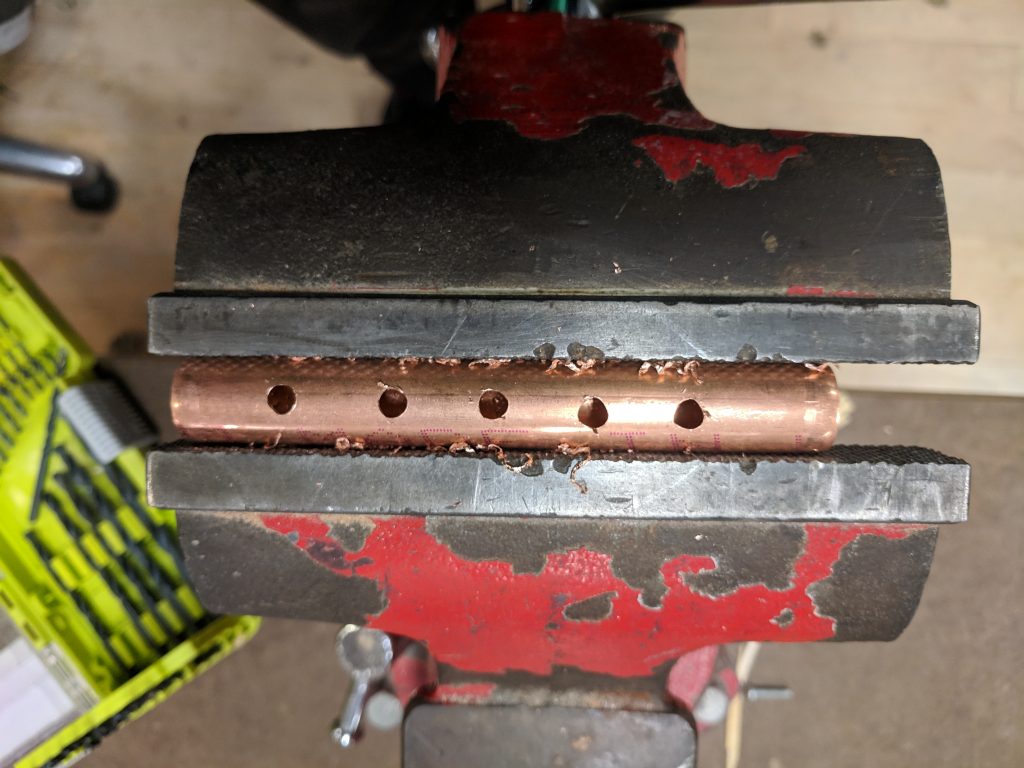 The final step was to wire the electricals, align the LEDs with the drilled holes (that was a tedious nightmare), and assemble the structure. The copper is soft enough that I could slightly deform the ends of each section so that the rods simply pressure fit into their connectors. This was a lot quicker and safer than trying to learn how to braze copper within a week. 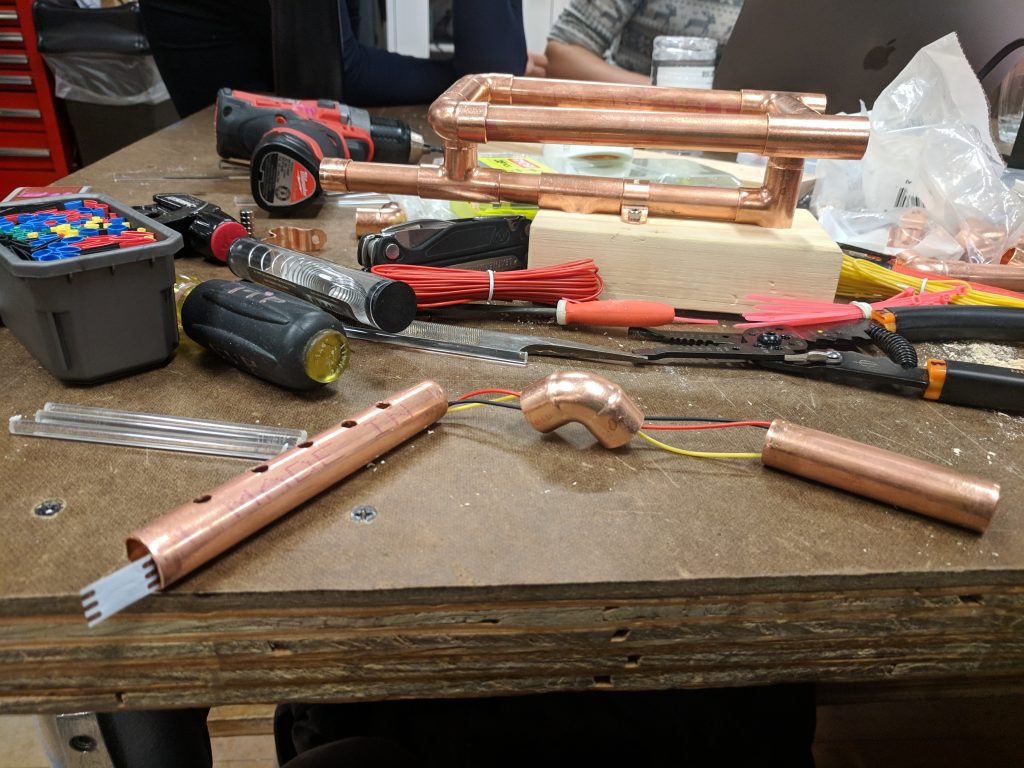 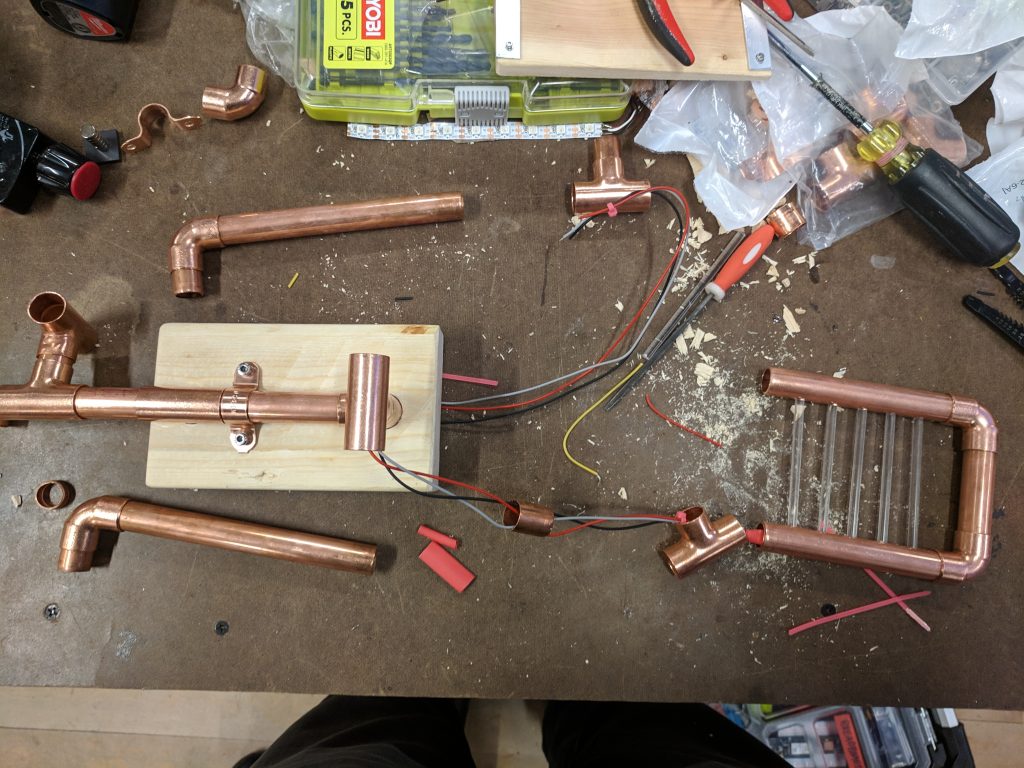 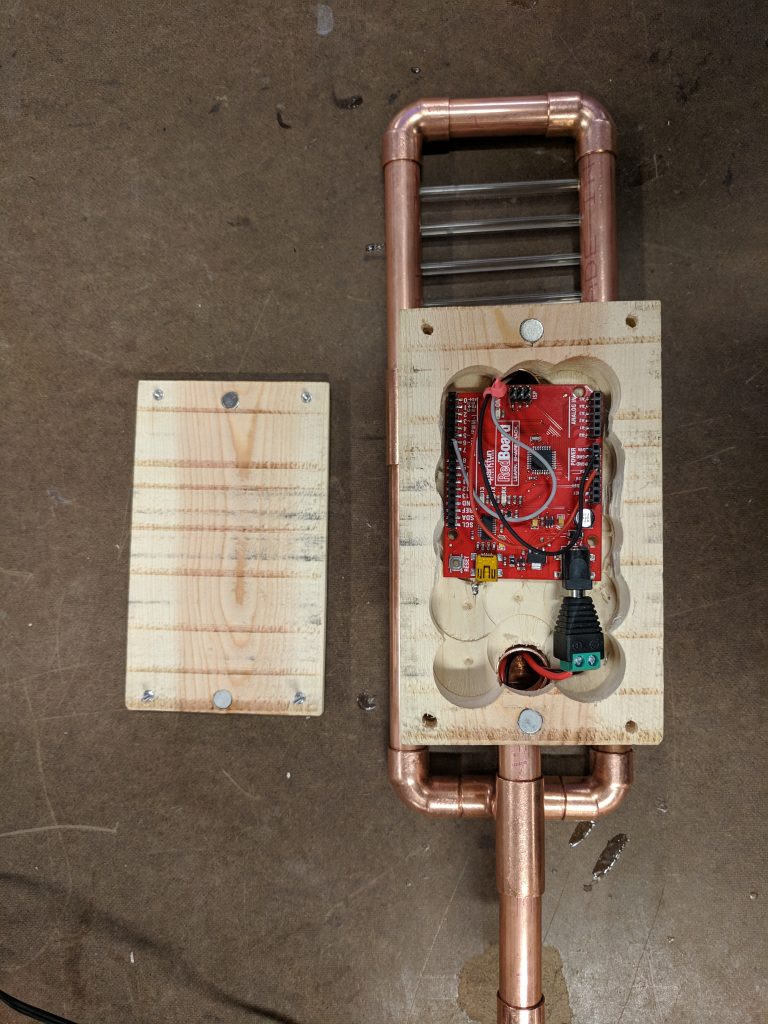 Since  there are no external inputs other than power, all I needed was a small hole for a DC jack I had. Sadly it was not a panel mount so I had to figure out a way to attach it (superglue). 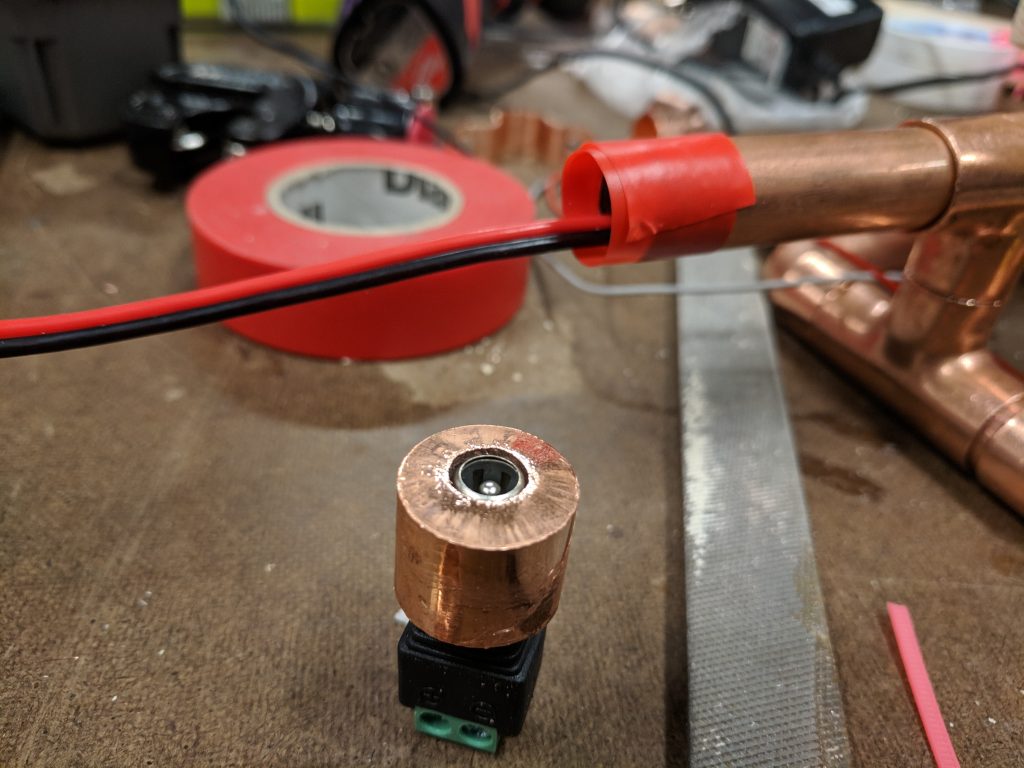 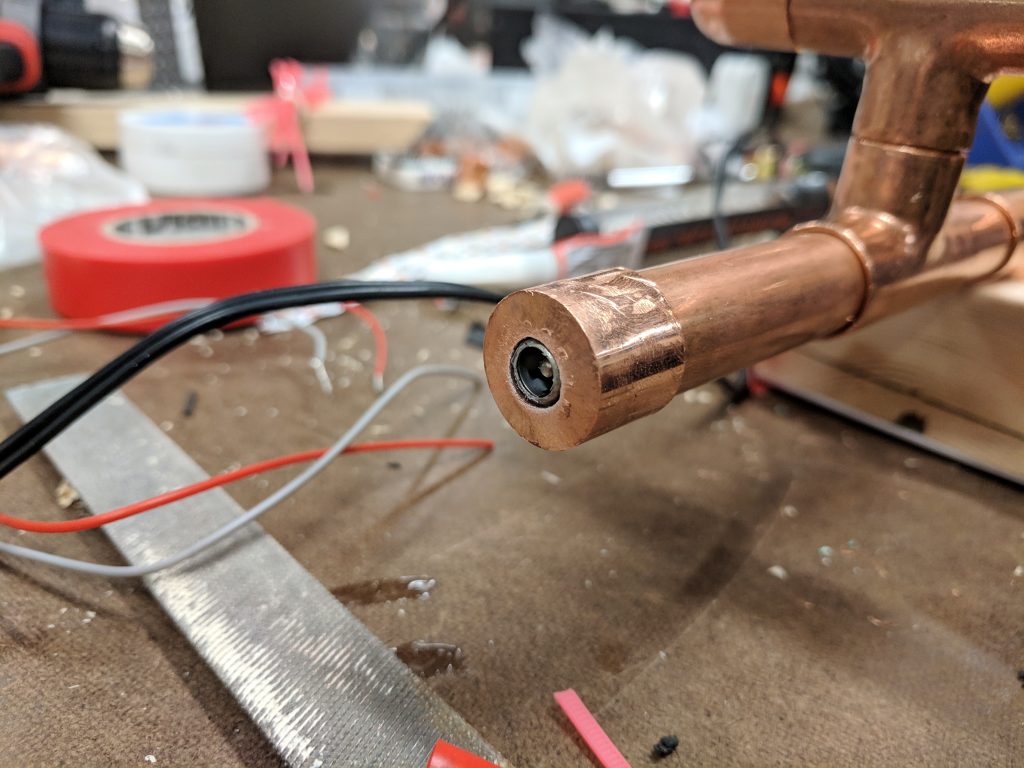 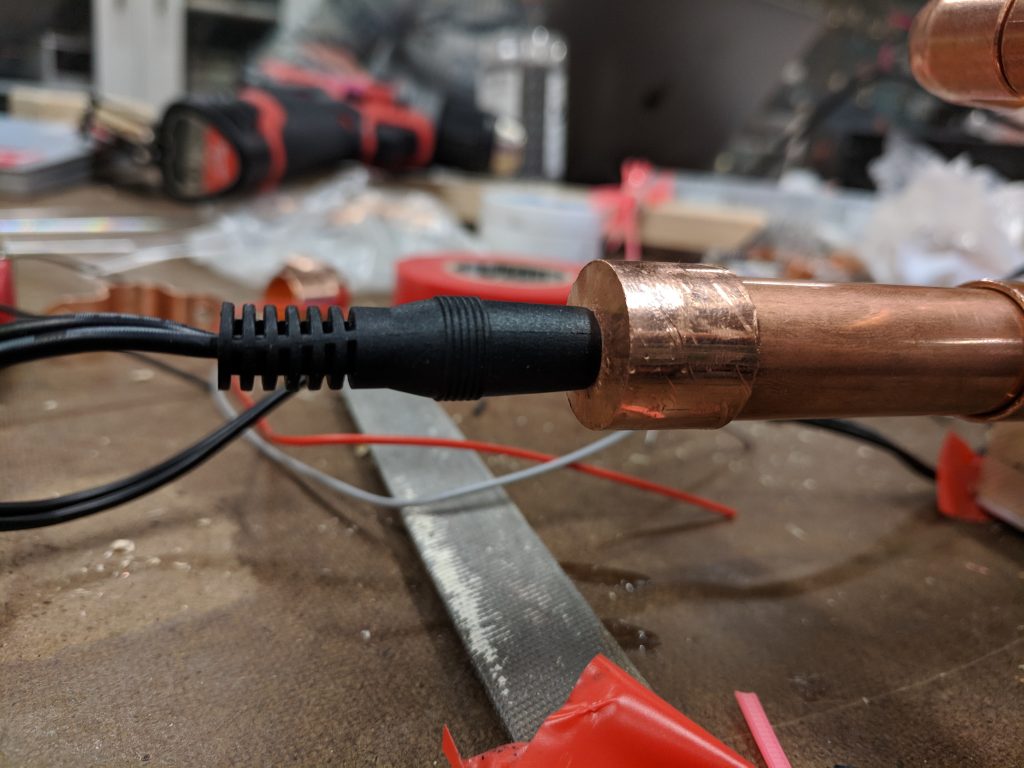 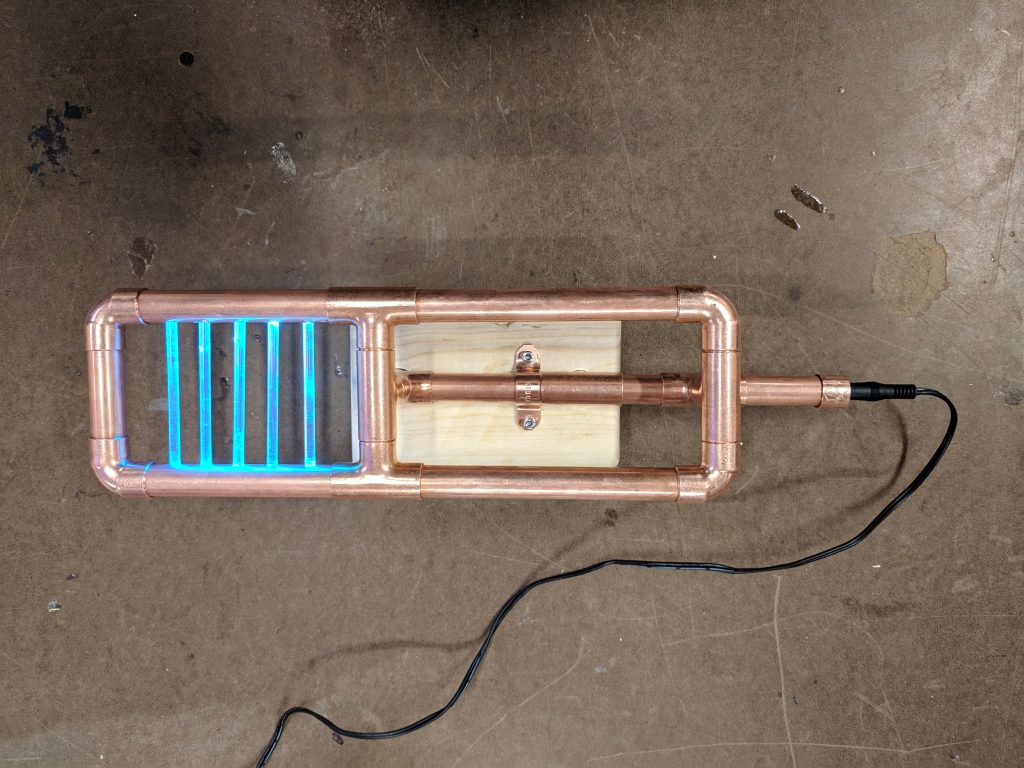 A fellow student saw the completed version and said “it looks great! What is it?”
Honestly, I don’t know.

One thought on “A Steampunk-Slash-Kitschy-LED Light Thing”