New York is a spectrum of signage, from aesthetic, informative, and concise information delivery systems to the most confusing array of seemingly random assortments of words and icons (the NYC street parking signs come into mind).

A short walk around the Village garners a number of examples from across this spectrum. 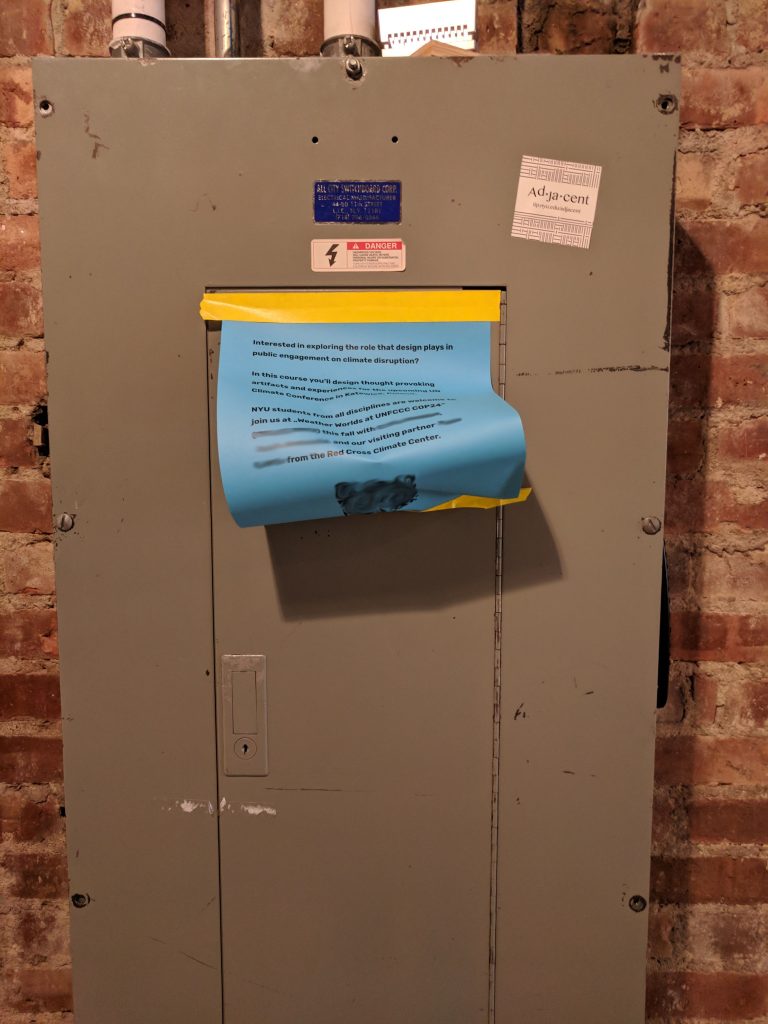 From within our own walls at ITP comes my first example; an advertisement for a class. I have blurred out names and the QR code for privacy.

The most striking aspect of this poster in its current state is how crumpled it is. Of course, once you release your poster into the ‘wild’ there’s not much you can do to protect it from such cruel acts of vandalism (intentional or otherwise), but I do think that it is important to consider the physical space(s) your poster will be, not just the content of the poster itself.

In this case, the poster is pasted haphazardly in a corridor that many people walk through, and on an electrical box that may require access. The placement itself is questionable as the poster may be subject to people brushing by in a rush, or people moving it to access the electrical box.

In addition, the untidy, ripped electrical tape that has been used to secure the poster does no favours. Perhaps this is a stretch, but there’s a concept in social behaviour known as the Broken Window Theory. Distilled down to its usefulness in this case, the theory suggests that visible minor problems encourage, or at least don’t discourage, more serious problems. I propose that in the case of the above poster the haphazard and untidy placement of the poster made it seem less of a problem once the poster was accidentally (or intentionally) crumpled.

In essence: the unintentional crumpled paper fits the aesthetic of the original ripped tape. Perhaps if the poster was more neatly placed, a passer-by would have more incentive to ‘fix’ the placement if they walk by and accidentally displace it.

The environment of the poster is not the only concern that I have with it. The design itself is, undiplomatically speaking, boring.  Three paragraphs of black text on blue paper. There are no graphic elements to catch attention, there is no information hierarchy save the top-down nature of prose, and frankly if the poster were not so crumpled I probably would have passed it by completely oblivious.

The only design element that I can vaguely comment positively on is the choice of yellow tape with blue paper. The hint of yellow does complement the blue background. That said, with such little thought put into the rest of the design I would not be surprised if this was nothing more than a happy accident. 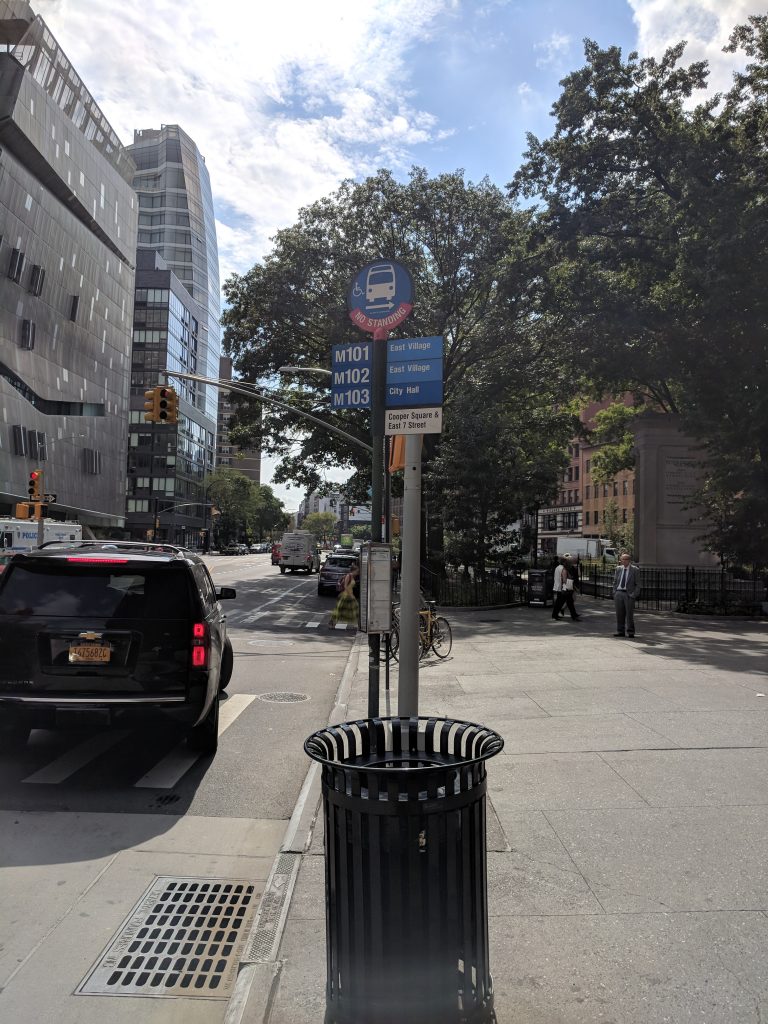 Venturing outside we soon come upon another example of ‘bad’ design, or rather design that does not do well in capturing attention and conveying information clearly.

I do not yet have much experience with the NYC bus system. This bus stop signage is certainly not beginner-friendly. Perhaps there is some logic to this system that makes sense to transit veterans, but it is obscure to me.

What is clear to me, to be fair, is that the M101, M102, and M103 busses stop here. What is less clear is why “East Village” and “City Hall” are labelled with different colour codes. I assume they are the end point of each bus line, but that is not explicit.

What is far less clear is the sign on the top. There is an arrow pointing towards the street, perhaps indicating the boarding side (which seems redundant given the placement of the sign), an accessibility icon on the other side of the bus (does that mean the accessible entrance is on the left?), and a large red banner indicating “No Standing“. Does that mean no standing at the bus stop? That seems confusing since it’s a bus stop. Perhaps the message is for cars? That is not made clear. 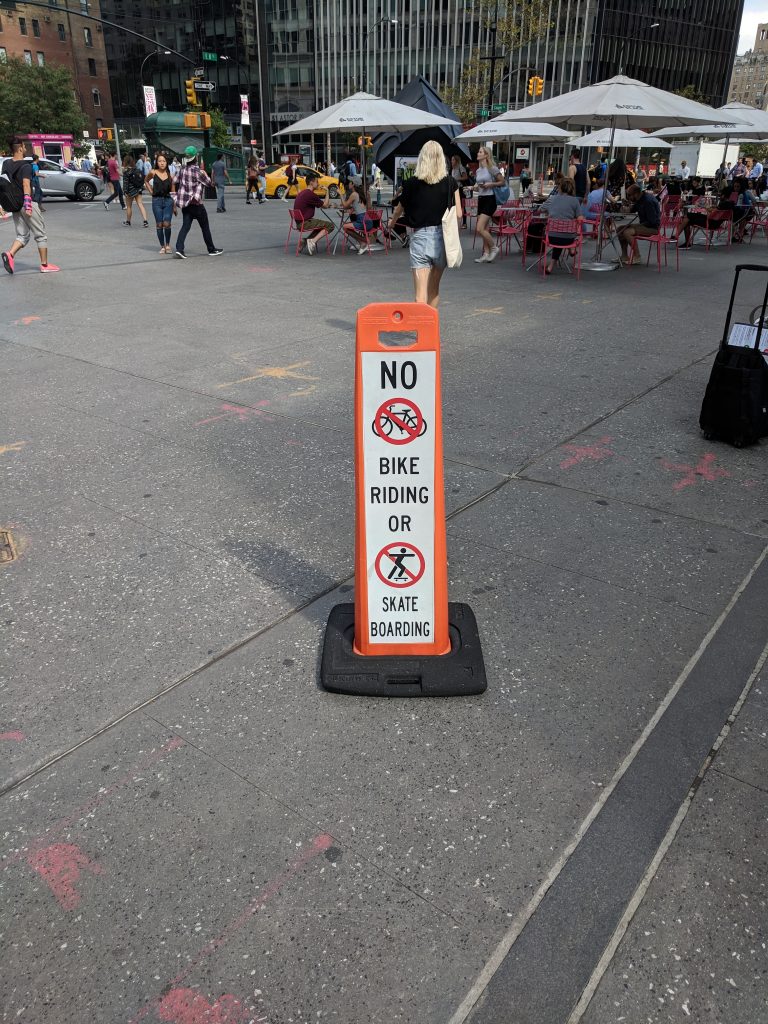 A design that I take a little more kindly to, even if I think the message is off-putting, is this no cycling/skateboarding sign.

It is simple and conveys its message. It understands its environmental context – that it must quickly convey clear instructions to many rushing people.  Perhaps the text is a little redundant given the icons, but the case could be made that the icons are there to catch the attention of passers-by, and the text clarifies the message.

Certainly the aesthetics could use some work; there seem to be three different typeface-spacings on such a short sign. But at the very least this sign conveys its message clearly. 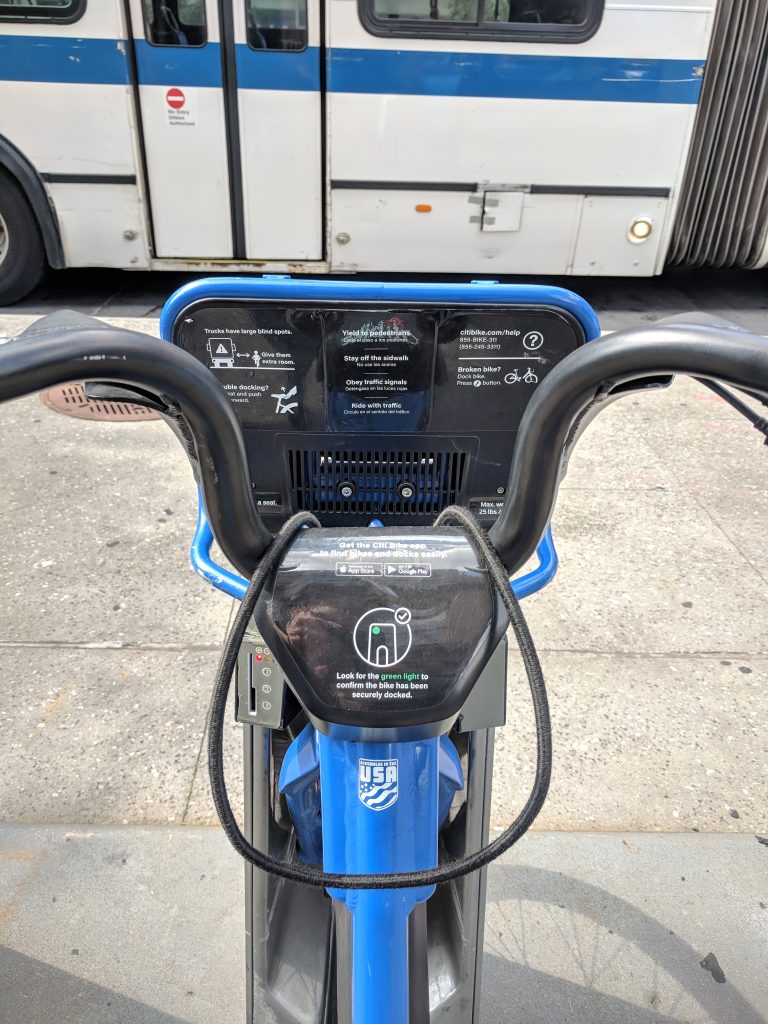 Finally, I came across this instructional sign on the ubiquitous Citibike. I have never used Citibike, but I found these instructions far more clear and beginner-friendly compared to the bus sign I mentioned above.

There are clear, concise instructions central on the dock, with extra information supported by consistent icons to the sides.

On the bike itself is one key piece of information, supported by an easy to understand graphic.