A few weeks ago I helped out a friend who lit up the Cornell clock tower using sequences from various human DNA for the light patterns. My part in the project mostly involved advising on the types of lights to use. They went with Adafruit Pixies.

Since then I’ve been thinking about ways to go bigger than that. As all LED enthusiasts know, brighter is better. I had exactly 5 spare LED 120V bulbs lying around at home (for general household use), so once the project prompt to “Make 5 of Something” was announced, I thought it’d be a good opportunity to experiment with much brighter lights than our typical ITP fair of breadboarded LEDs.

I also have a (pretty rational, I think) fear of using 120V wall power in my projects, so this project was a good way to delve a little further into going above the usual 5V – 12V. 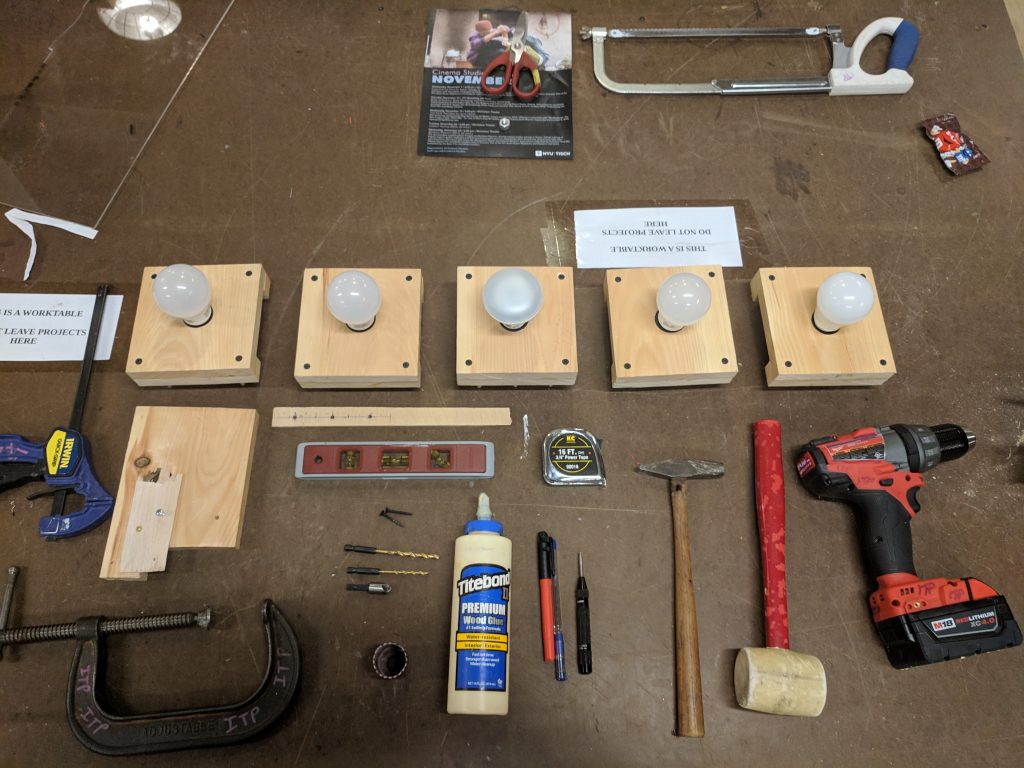 Since this project involves dealing with relatively high voltage, I did not want to skimp on the electrical components (unlike last week, when everything came off the junk shelf). For the electricals I used a combination of purchased and owned components: 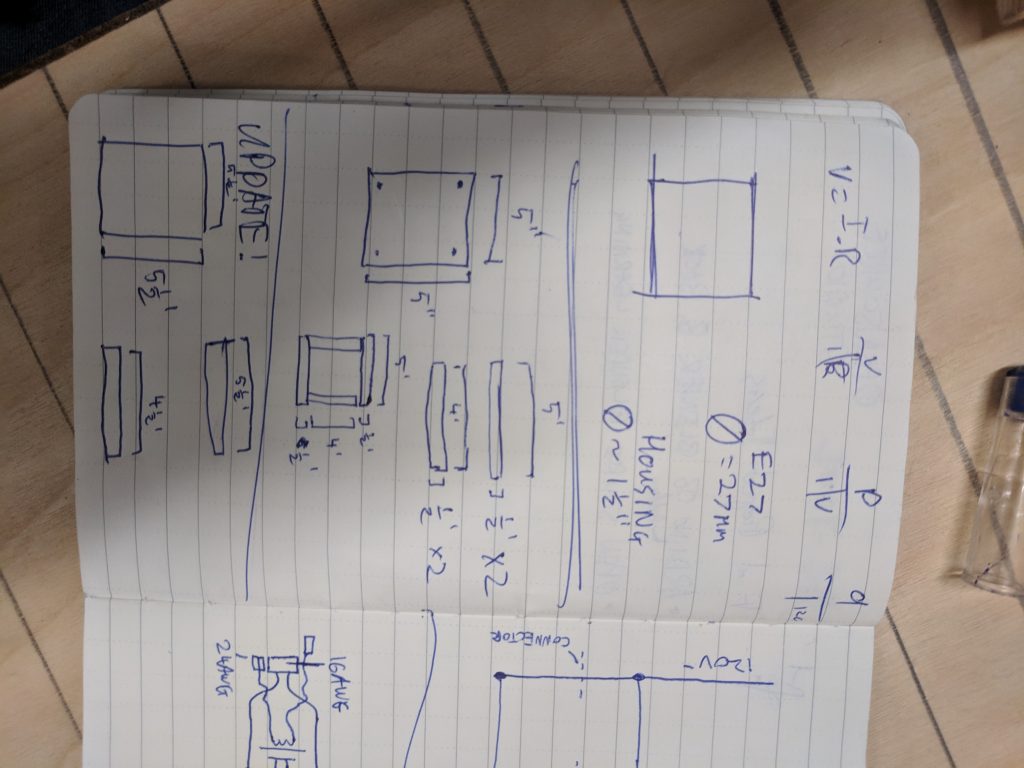 After sketching out a basic design of what the build could look like, I briefly browsed the unclaimed materials bin to see if there was anything useful. There was! An unclaimed 5 1/2″ wide board of pine (?) was perfect for me. 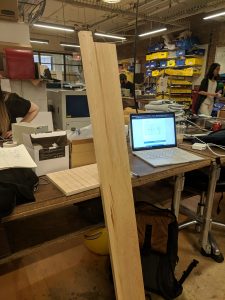 I adjusted my sketch slightly (from 5″ wide to 5 1/2″), but otherwise this looked like pretty much all the material I’d need (except for a few details later on).

The first thing I needed to do was find a way to cut the right sized hole (about 1 1/2″) in the center of the block. Amazingly, the ITP toolbox had just the right sized drill bit. Less amazingly, the bit was incomplete and useless. Even more amazingly John let me borrow his (complete) version of the tool to make the cuts: 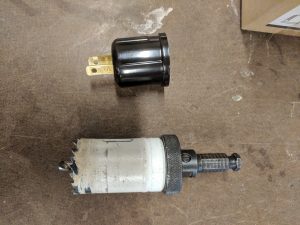 Cutting things down to size

The end of the board I had was a bit funny-looking, so I cut it off – with a bit of space so that I could experiment with the hole-making tool, screw holes, and such. I suppose that piece was my first pancake. 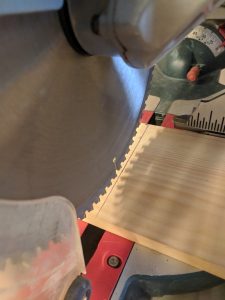 I cut a test hole in the pancake, and the lightbulb housing fit perfectly. 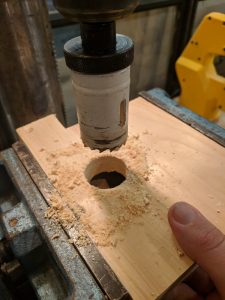 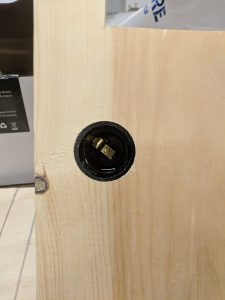 Pluribus E Unum? – Out of One, Many

Once the basic premise of my contraption – that the lightbulb housing could fit snugly in the hole – was confirmed, I turned my attention to making many of them.

Using the compound sliding miter saw (incidentally the second coolest sounding tool next to the LAZER cutter) and a stop block I made quick work of five 5 1/2″ x 5 1/2″ squares and ten 5 1/2″ x 1/2″ rectangles. 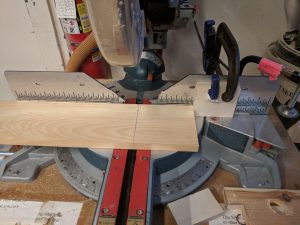 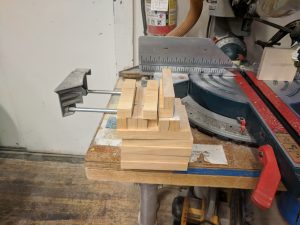 After that, I aligned and cut the center holes. No fancy jig for that, each hole was measured manually. 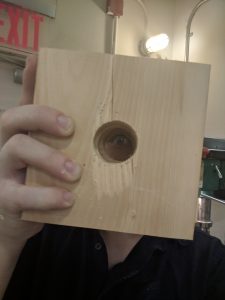 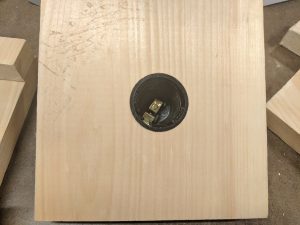 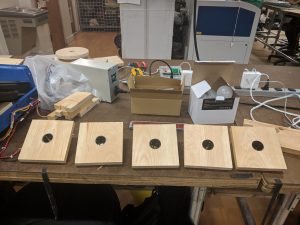 Although measuring 5 center points was doable, the prospect of 4 screw holes for the legs on each of the 5 boards, so 20 careful measurements in total, seemed tedious. At this point I fashioned a rudimentary jig to help align the screw holes the same distance from each of the 4 corners of each square: 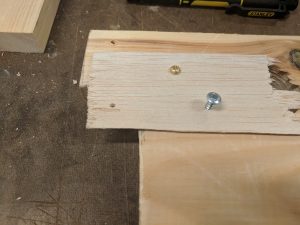 It worked marvelously and saved me at least minutes!

With the screw holes in place the next step was to attach the legs I’d cut earlier. Each leg needed to be quickly held in place as I drilled into it, but that did not require a lot of clamping force. As such I used the speed clamps so I could align with one hand and clamp with the other. 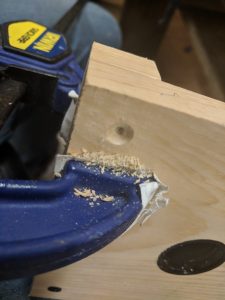 I found a cheap countersink bit at a hardware store so tested it out here. It sucks (i.e. creates the beveled hole slowly) but does the job.

One problem that arose later in the process involved the intended height of each stand. I had hoped to bend the metal pins of the E27 socket out so that the stand could rest on its wooden legs, but when I tried the metal pins wouldn’t budge without cracking the plastic housing. 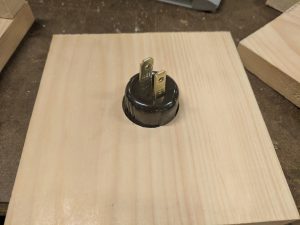 A quick solution to this problem was to raise the platform a bit higher. I didn’t have enough more of the 5 1/2″ board to make more legs, so I yet again raided the junk shelf in desperation. I found a perfect set of dowels that provided an adequate solution: 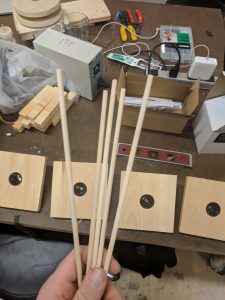 I intended to raise the platforms a little higher using the dowels as legs. This required drilling repeatable holes in the legs I’d already attached to the squares. Time for another jig! If you can even call it that. Really it was just a piece of scrap wood cut to size with evenly spaced holes for a center hole punch: 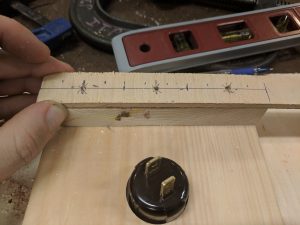 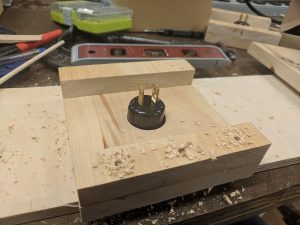 I used the band saw (unpictured) and stop block to cut the dowels evenly. I thought they seemed thin enough that the band saw wouldn’t make too much of a hash job of their size. I was mistaken. The dowel pieces came out a bit uneven, but because they’re such a tight fit in the holes I drilled I could compensate the depth each dowel went in. 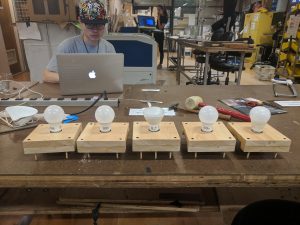 Voila, 5 light stands ready to be filled with electricals. 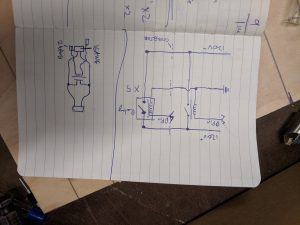 I created one circuit as a proof of concept, then turned to creating all the rest at once.

The real tedium of this project manifested in the cutting, stripping, and soldering of all the wires involved. Added to the mix of tedium was the anxiety involved in dealing with 120V AC wall power, a brand of electricity you may recall I am less confident with.  Incorrectly wire a 5V Arduino circuit and you might fry your component. Incorrectly wire AC wall power and you might fry your building, or your brain.

That’s all to say I was slower and more careful than usual, and as such this process took quite a while. Nevertheless, I was able to port some of the mad new repeatability skills I’ve gleaned into this process as well.

With wire cutters in hand, I cut all the different wires down to size. 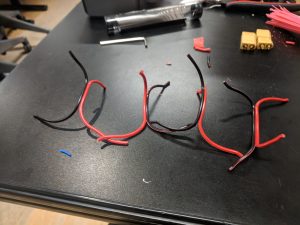 Then, in one go, I stripped all the wires. Finally, most of the soldering was done in one go as well. It wasn’t exactly a mindless process; as mentioned above I had to be on alert so as to prevent miswiring-related fires or electrocution. It was, however, handy to perform all similar tasks at once, and save some time  from changing tools and thought patterns. 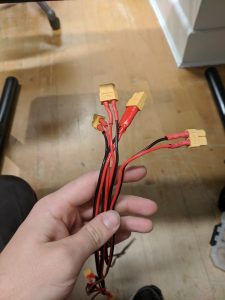 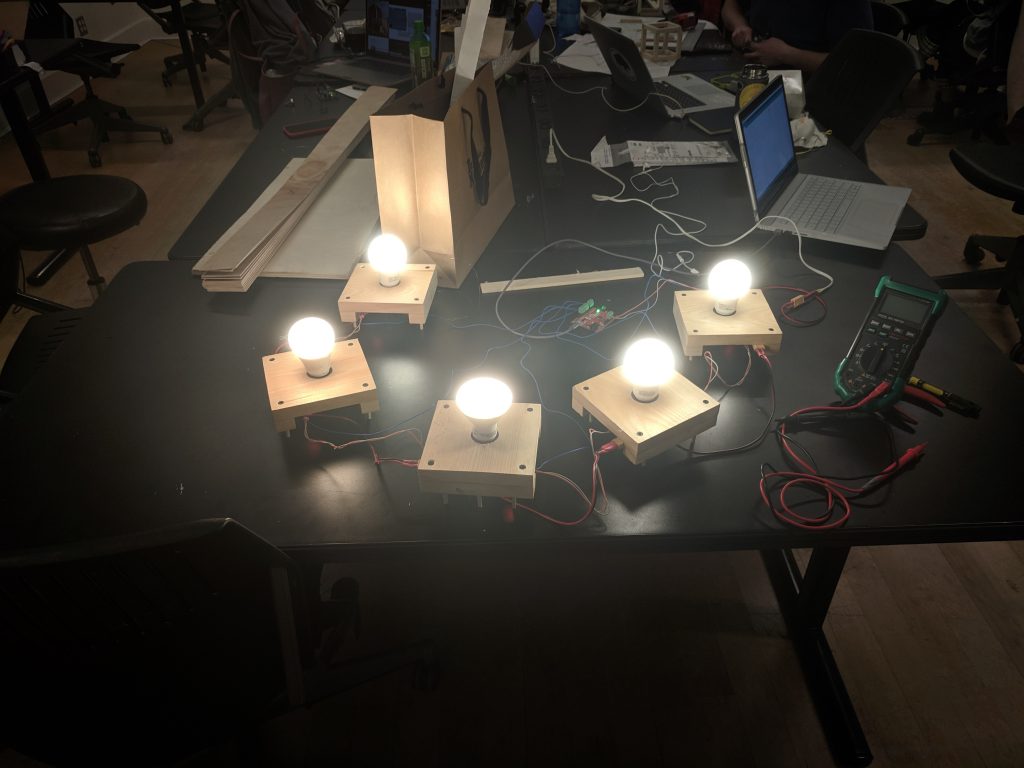 For the finishing touches: a liberal application of cable ties.

One thought on “5 Arduino Controlled Lighbulbs”