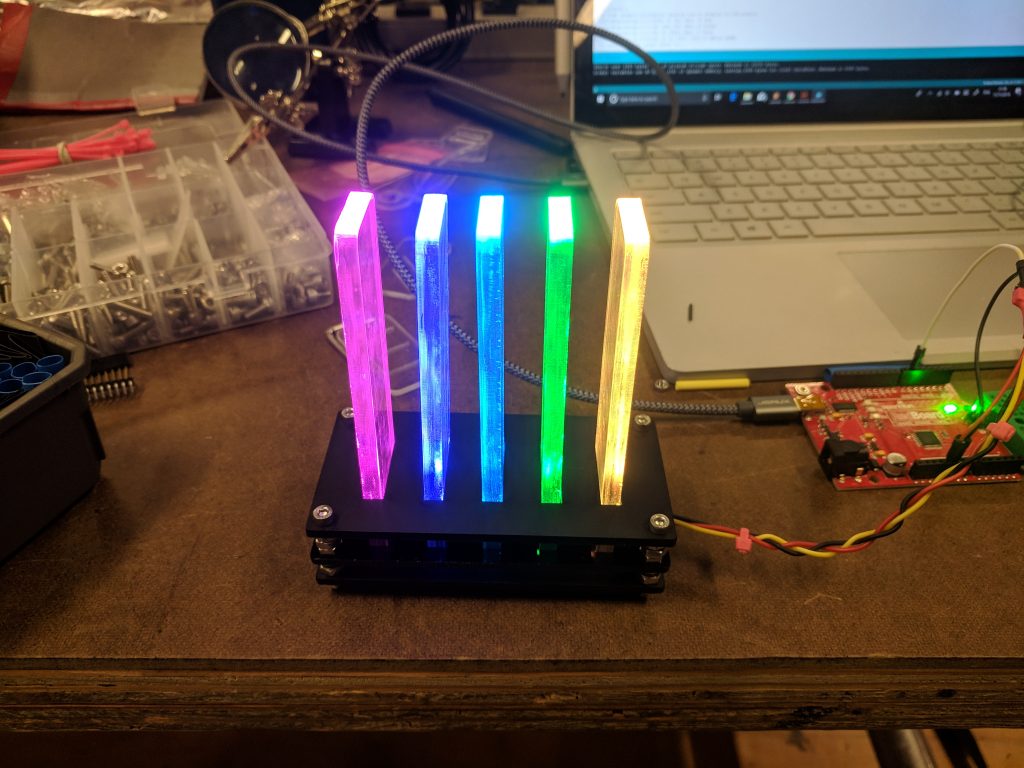 This week’s assignment called for us to use one of ITP’s laser cutters. Though I booked the 50 Watt engraver, it was in use so I used the 60 Watt machine for this project.

I knew from the get go I wanted to play around with Total Internal Reflection acrylic, or as best I could find in Canal Plastics. I went through a few idea iterations, including a sort of light-up piano with custom cut keys. Although exciting, that idea took a back-burner when I thought a little about scoping and the timeline that we had for this project (one week). I settled on a simple but (hopefully) elegant design for a light up object, using a short strip of Neopixels. 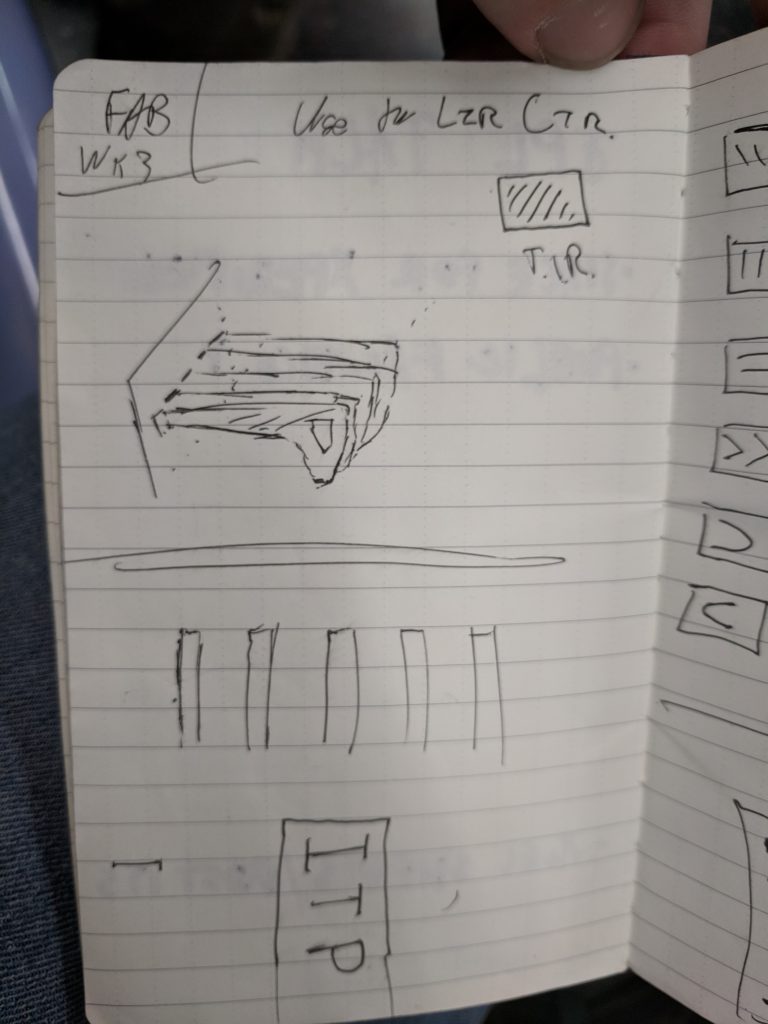 The design was simple enough to translate from terrible hand drawings to nice clean vectors on Illustrator. I used the digital calipers to accurately measure the thickness of the material (it was definitely not exactly 1/4″ as advertised), so as to know the size of the hole to cut. I also used the calipers to determine the distance between each hole based on the distance between each Neopixel on the strip.

Since we have to be careful about the width of saw blades when cutting, I figure we should also be aware that the laser has a width. I did a little searching and found that the area the laser vapourises is called the kerf. I shaved a few millimeters off my hole size to accommodate the kerf.

I wanted to explore how different shapes and cuts affect the propagation of light within the piece. To be honest I wasn’t particularly meticulous about this as I was mostly just curious, but I gleaned some interesting information nevertheless.

Essentially I drew a few interesting lines within a few rectangles, and a few odd shapes as well. once I cut these out I help them up to the LED light on my phone to see if they’d behave differently. 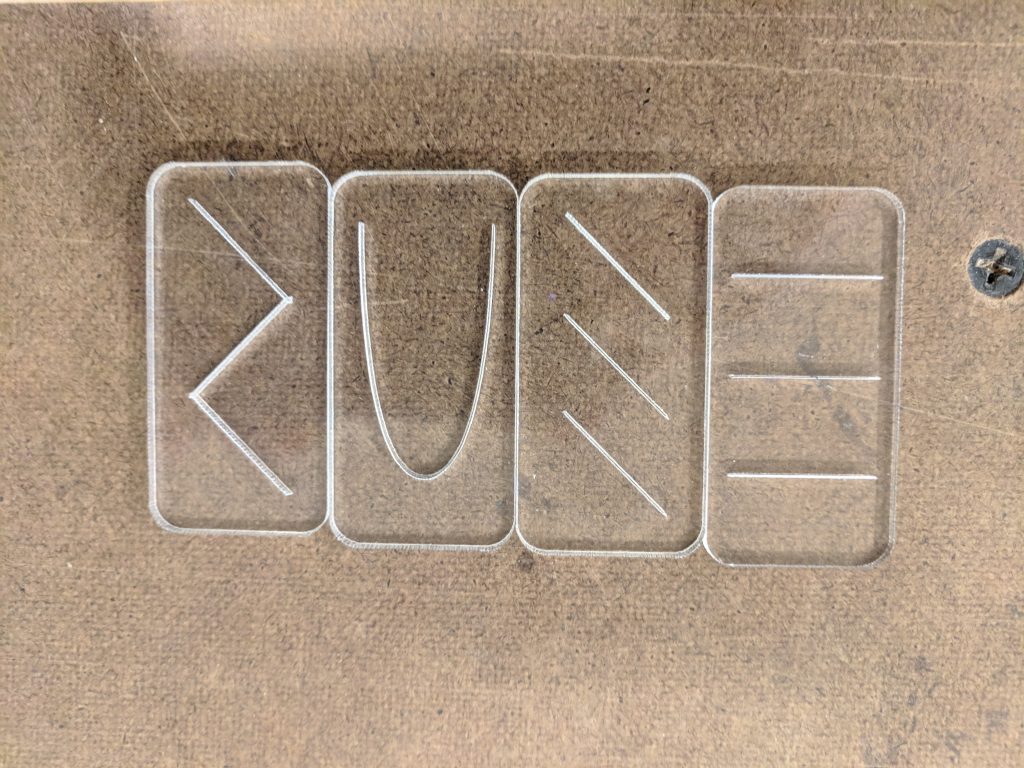 Once I had played around with different shapes, I settled on – for this project at least – plain empty rounded rectangles; the light seemed to have the most even spread across the sides, and I liked the clean, unmarred look. It reminded me a little of Superman’s fortress of solitude.

One thing I found interesting; when I purchased the black sheet of acrylic, the side I looked at was the glossy side, and I just assumed that the reverse side would be the same. The reverse was in fact a matte finish – which worked out well for the look of my project. I can’t rely of happy accidents every time, though, so I’ll definitely check both sides next time. 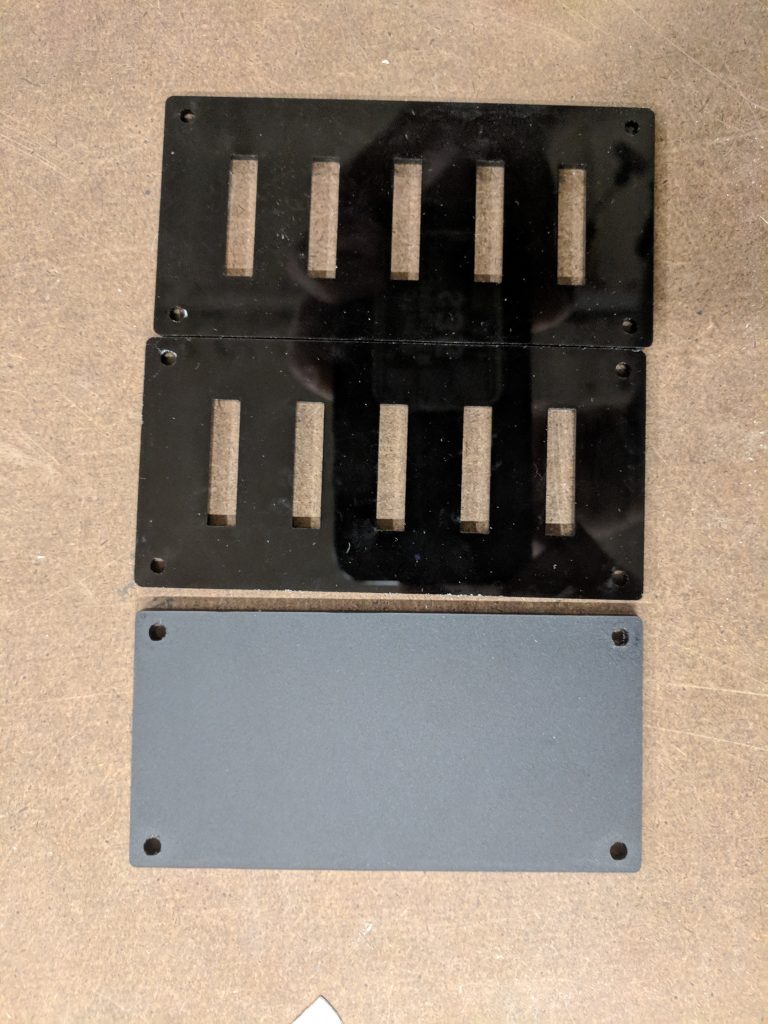 I made sure to include 3mm screw holes for the M3 screws I have lying around. The (roughly) 1/4″ acrylic required a bit of testing to get the right settings (ended up as 8/100/5000 with three passes). 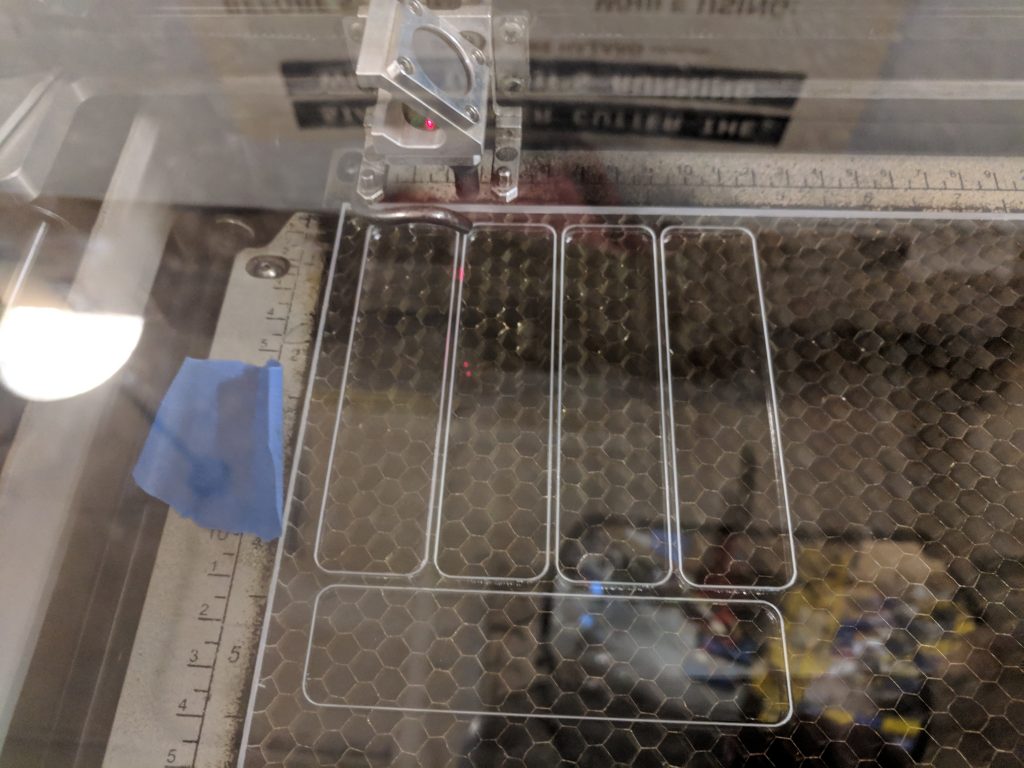 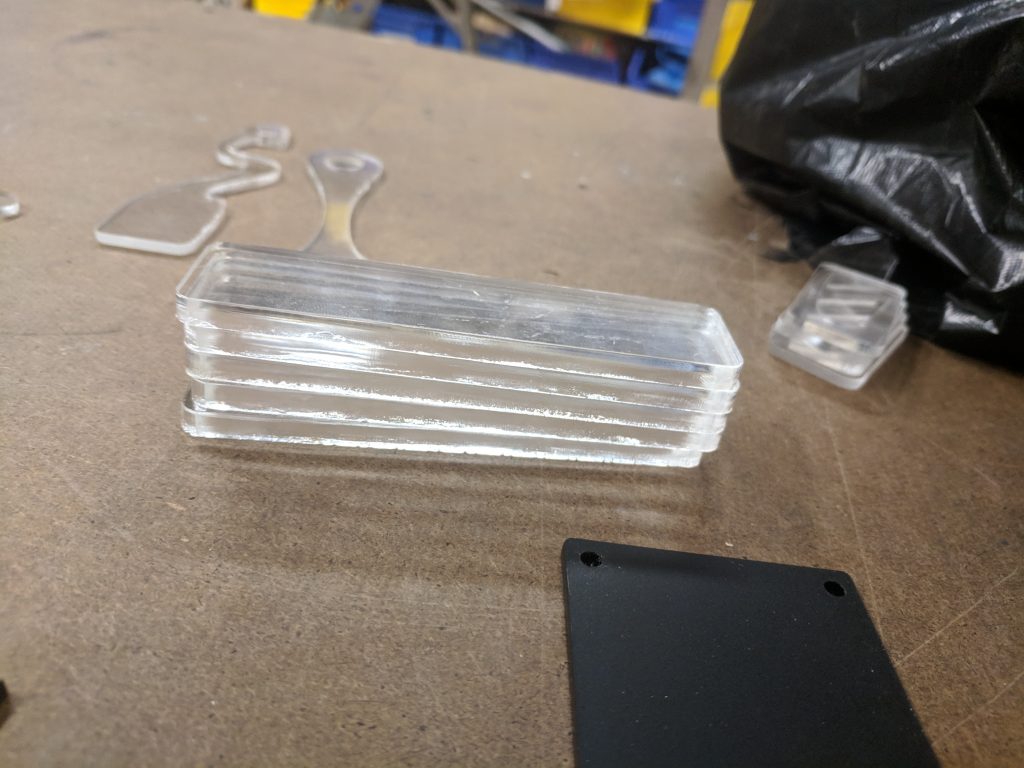 After that the object simply required assembly. 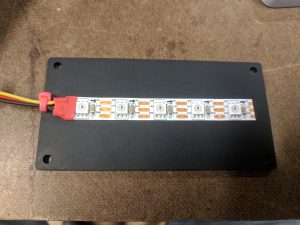 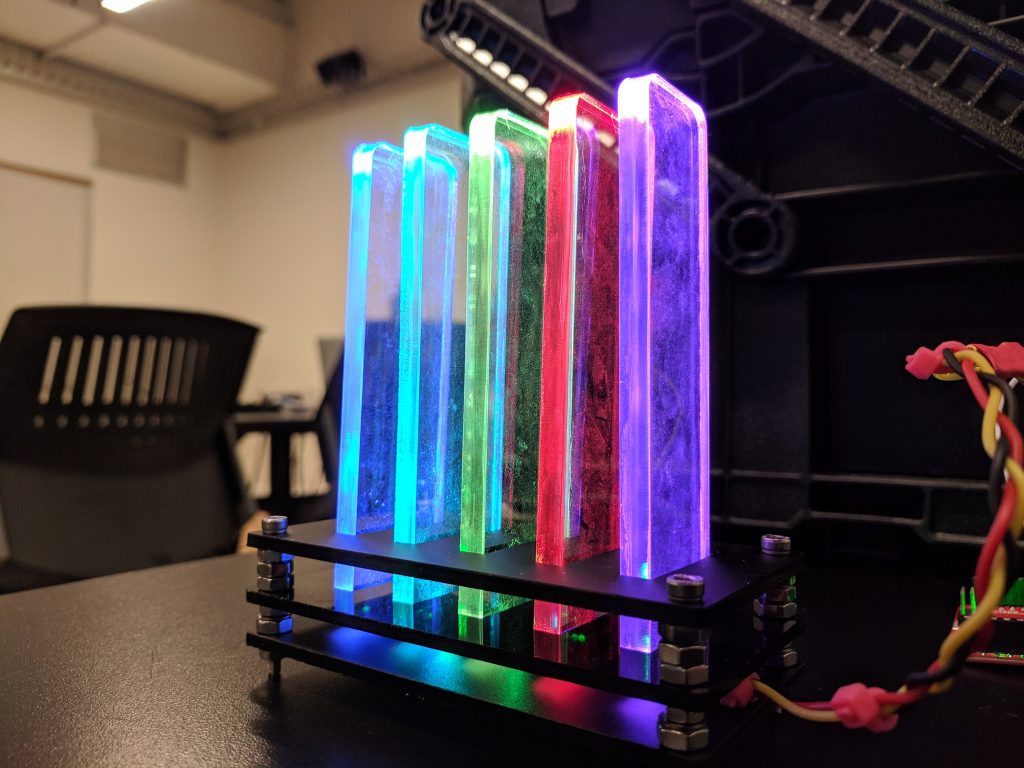 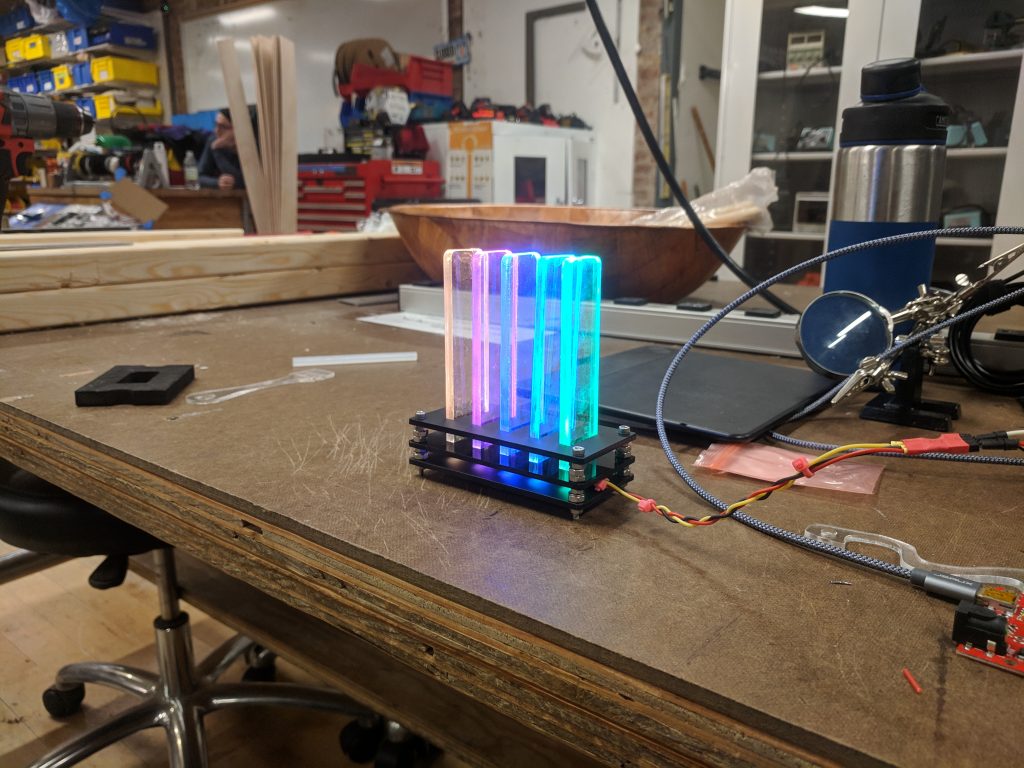 One thought on “A Laser Cut Light Thing”